Micro Surfacing Gets Chickasaw Nation Roads Out of a Rut

Find a proactive and cost-effective solution to address roadway maintenance, utilizing best practices according to the pavement preservation concept. 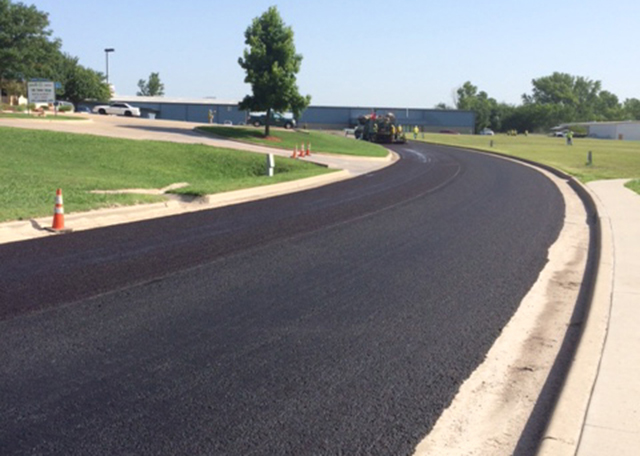 Background: Getting on the Right Path

Hot mix asphalt (HMA) surfaces are ideal pavement options for highways, residential and local roadways. Their unique properties allow for timely application and speedy return to traffic, while providing lasting durability against heavy traffic and harsh weather conditions. HMA surfaces are known for smooth ride quality meaning better fuel efficiency, higher safety and less wear-and-tear on motor vehicles for the driving public; with so many benefits, it’s no wonder this is the pavement of choice for the Chickasaw Nation in Oklahoma. However, the driving surface of HMA pavement can degrade over time from cracking, rutting and other major distresses. This can prove costly as conventional methods of repair include mill and fill where the upper one to two inches of old pavement are removed and a new HMA overlay is applied. While this is a widely accepted and utilized method of repair that can provide lasting results, such measures are expensive and can quickly overwhelm a maintenance budget. More progressive methods utilize responsible innovative treatments to help ease the cost burden of conventional measures and effectively maintain roadways. Chickasaw leaders sought to learn about these proactive methods of addressing roadway maintenance, ultimately leading them to pavement preservation.

The goal of pavement preservation is to extend the maximum service life of a roadway network in the most cost-effective means possible while meeting road user expectations. Contrary to what some believe, preservation treatments cost less per square yard to maintain than a road that is neglected and must be replaced every 15-20 years. Knowing which treatment to use, at the right time, on the right road, is pivotal in making pavement preservation work for you. Putting these practices in place early can allow agencies to receive up to 40 years of service life from their roads and save taxpayers thousands.

Determining which preservation treatment to use depends largely on a road’s Pavement Condition Index (PCI), which measures the condition of your pavement from 0-100, with 100 being the most adequate roadway in excellent condition. Any road with a PCI under 60 needs immediate attention, but those ranging from 0-24 indicate a failed roadway in need of full reconstruction. Key point, the lower the PCI rating, the greater the distress, and the more expensive the remediation treatment will most likely be. The good news is you can introduce preservation practices at most any point in a life cycle and reap the rewards of extended service and overall cost savings. That’s the beauty of pavement preservation. 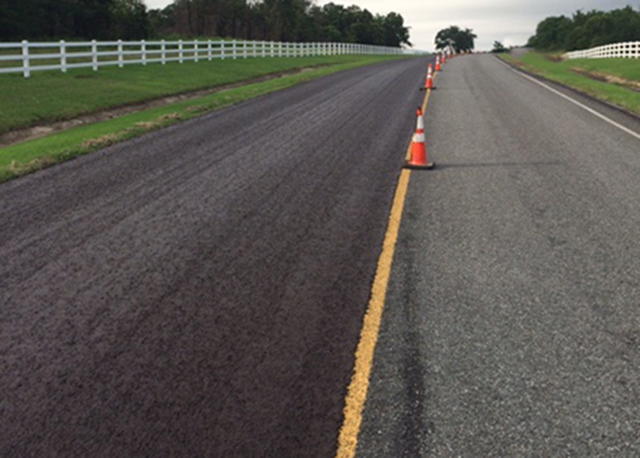 The Chickasaw Nation’s road maintenance crew had faced a recurring problem with rutting on some of their HMA roads. In the past, they had tried applying chip seals over the distressed surfaces; however, chip seals are not designed as a long-term treatment for this type of damage and the costs began to pile up. Determined to find an effective solution, tribal leaders attended a seminar on pavement preservation and maintenance solutions where they were introduced to micro surfacing. Following the seminar, Nick Woodward, Chickasaw Nation Special Project Manager, met with Area Sales Manager Johnny Roe, with Ergon Asphalt & Emulsions, Inc., (Ergon A&E) to discuss how micro surfacing could become a useful tool in maintaining Chickasaw roads.

Micro Surfacing is a pavement preservation treatment designed to correct and provide longer-term relief from rutting and other minor distresses, as well as inhibit oxidation and raveling. Less expensive than a mill and fill HMA resurfacing application, it improves skid resistance by increasing surface friction, thus, enhancing safety for motorists, especially during hazardous weather conditions. This emulsion is also polymer modified, providing a more durable surface pavement and extending a road’s service life by six to eight years. An added benefit of micro surfacing is this application provides an adequate foundation for future treatments to easily build upon through the pavement preservation process.

Following the initial meeting between Woodward and Roe, a plan was devised to test micro surfacing on three local roadways. Ergon A&E’s CSS-1HLM micro surfacing emulsion was the chosen product for each of these applications. One of the roads selected for treatment was Village Road in Kingston, Oklahoma. This road was previously repaired with product treatments supplied by Ergon A&E—crack seal, chip seal and fog seal—in July 2013. While there was no evident distress to Village Road, micro surfacing treatment was the next proactive step in the best practices of pavement preservation to help maintain the road’s exceptional PCI. 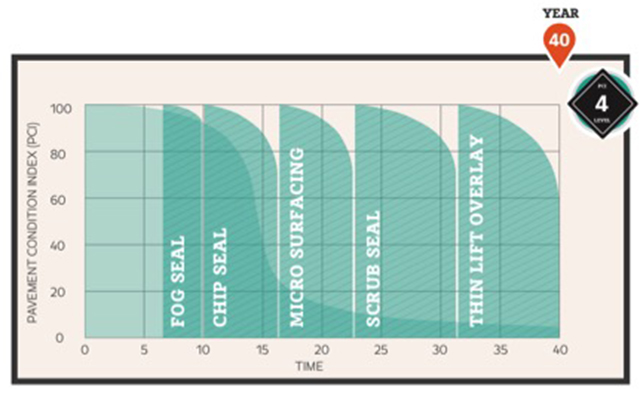 This illustration outlines a plan to get the best performance and maximum number of service years out of your roadways, while stretching your budget. The year and time to apply any combination of these treatments may be tailored to the current needs of your roadway.
PCI Chart showing the various stages of pavement preservation treatments used over time, including micro surfacing, which help maximize and extend the service life of a roadway.

Roe and Technical Marketing Manager Ron Matteson, were available during construction, answering technical questions about the process and ensuring necessary amounts of CSS-1HLM micro surfacing emulsion from Ergon A&E’s emulsion plant in Waco, Texas were on-hand. Representatives from the City of Ada, Oklahoma, the City Ardmore, Oklahoma, and the Chickasaw Nation Department of Commerce were in attendance to observe during the application process. 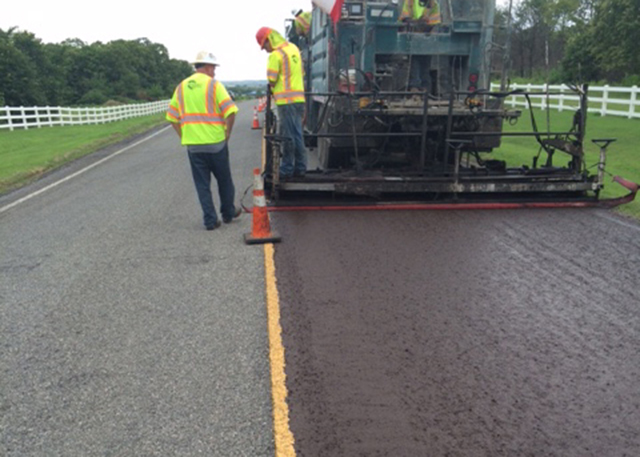 On June 21, 2015, Intermountain Slurry Seal, Inc., began work on Village Road, which was expected to be a one-day project. The plan was to treat one side of the road at a time, applying the micro surfacing treatment at 25 pounds per square yard across the road surface. Inclement weather delayed completion of the application, but the already treated area was able to cure in just under two hours, despite heavy rainfall. In an effort to avoid extended traffic delays, the crew suspended construction on the remaining half of the project until conditions were more suited for a timely application. The next day, construction resumed and the second half of the one-mile stretch was completed, curing and allowing traffic to return to the road surface in approximately 45 minutes.

The micro surfacing applications on Seabrook Road and Chamber Loop began on June 23, 2015. The micro surfacing mixture was applied to a combined length of one-mile at 25 pounds per square yard. The weather was mostly hot, sunny and humid throughout this phase of construction allowing the treatment to cure and the road to reopen to traffic in 45 minutes; both projects were completed in one day.

The Chickasaw Nation, cities of Ada and Ardmore, and surrounding agencies will monitor the micro surfaced roadways throughout the winter months. A positive evaluation will likely lead to much higher demand for micro surfacing treatments throughout Oklahoma and surrounding markets. Meanwhile, Roe and the Ergon A&E team will continue to serve as a resource to the Chickasaw Nation for new and innovative asphalt technologies as they proceed down the path of best pavement preservation practices.

You can learn more about the best of pavement preservation practices at www.savemyroad.com.