Needed an eco-friendly prime coat to promote strong bond between base and asphalt layers, and support same-day paving without sacrificing performance 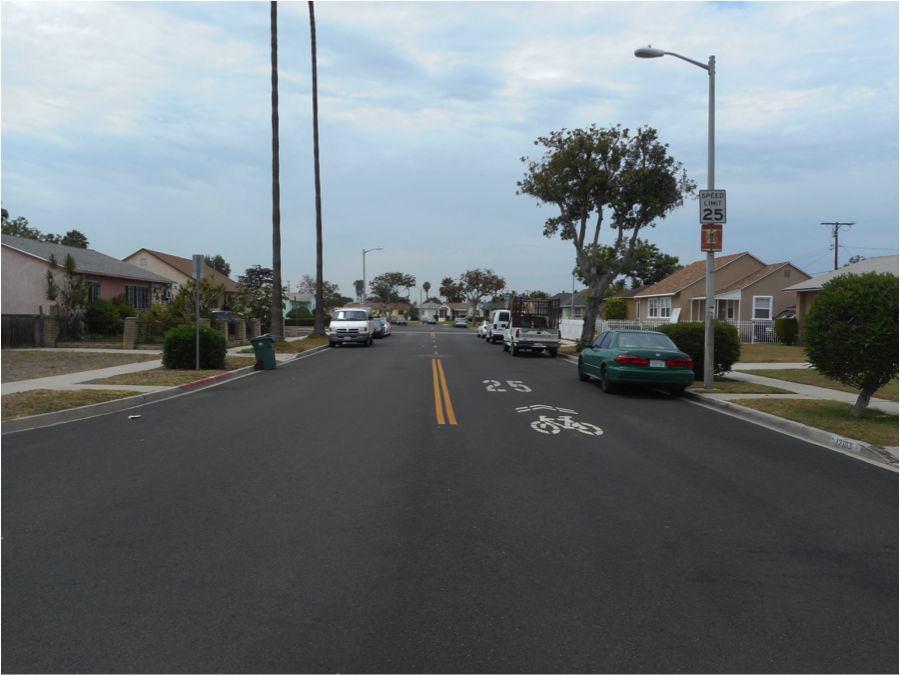 Los Angeles County, California, is the most populated county in the United States. With more people, comes more cars, and with more cars comes the need for more roads to get us from here to there. Maintaining such a massive infrastructure is a huge undertaking, and one the Construction Division for Los Angeles County (LA County), and Ergon Asphalt & Emulsions, Inc., (Ergon A&E), take very seriously.

Beginning in early 2012, LA County began drawing up a five-year stabilization plan for the maintenance and preservation of a substantial portion of their infrastructure. Some roadways were in such need of repair, they were faced with the lofty expense of total reconstruction, or the option of full depth reclamation (FDR), where the existing road material is recycled and repurposed into the base of the new road. It was determined FDR using Cement Stabilized Pulverized Bases (CSPB) and Cold Central Plant Recycle (CCPR) would have a total cost savings of approximately 35% over reconstruction, making it the best all-around solution. This fits the County’s mission of “providing responsive, efficient and high quality public services.” Ergon A&E’s ePrime, was included in the plan.

ePrime is a quick-curing, low-track prime coat designed by Ergon A&E and is part of a family of e-Series pavement preservation and maintenance products. It is designed to protect the base from moisture during the construction phase, its most vulnerable period. With a solid foundation, roads are better prepared to withstand the most trying conditions. It also creates a bond between the base and subsequent asphalt layers to prevent slippage. Solvent-based cutbacks can provide similar results but are environmentally unfriendly as well as a health concern, due to the use of kerosene in the emulsion compound. A major advantage of ePrime is its state-of-the-art solvent-free formula, making it environmentally friendly and less offensive to road crew workers. Its fast curing time also allows for same-day paving, usually within just a few hours following application. Best of all, it is competitively priced with conventional methods.

In the initial stages of the infrastructure stabilization plan, contractors began work on 124th Street. Although Ergon A&E’s ePrime was specified in the project plan, contractors instead experimented with SS-1H and CQS-1H emulsions. These products were not designed to penetrate the base and, therefore, resulted in the asphalt picking up, leaving nothing to stabilize the base and solidify the bond between the base and asphalt. Meanwhile, LA County also learned of a failure in another county where a contractor had convinced an inspector that a prime was not needed. Without the prime, that section of road experienced slippage and ultimately had to be replaced. 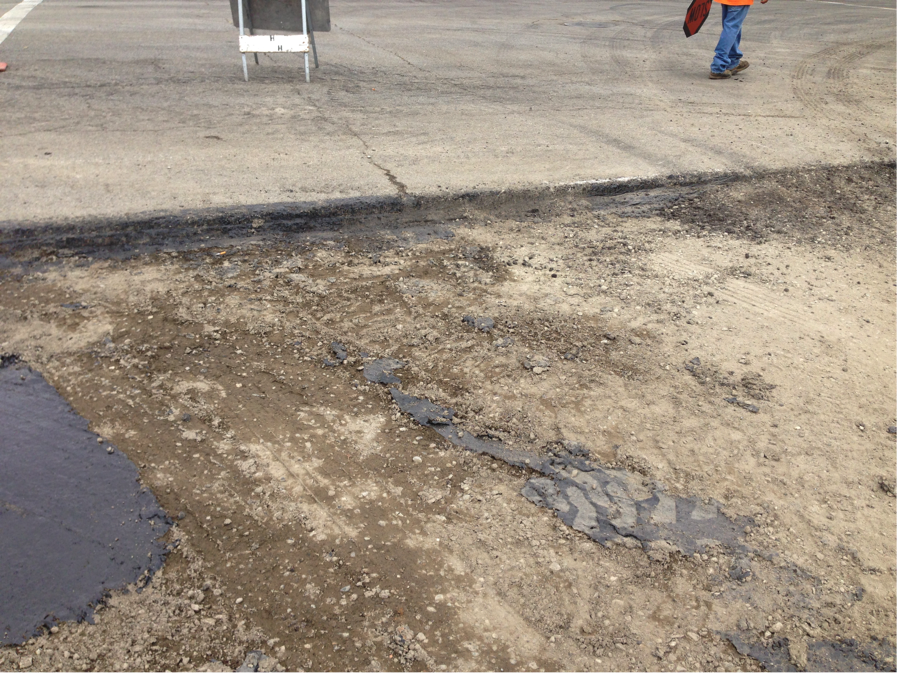 SS-1H and CSQ-1H emulsions are not designed to penetrate the base. Using these emulsions can leave the base exposed to the elements. Pick-up strips away the bonding material, which holds the base and subsequent asphalt layers, including the driving surface, in place.

Armed with this new information, the County took a step back to look at the overall picture. They determined it was necessary for the success of the plan, to put more focus on the type and application of the prime coat utilized in their projects. The obstacle was to find a solution that would meet all of the following requirements without compromising performance:

Having a great rapport with LA County, Ergon A&E Area Sales Managers, Tom Hicks and Todd Vargason, contacted the County and urged them to return to the original project specifications, which called for the use of ePrime. Meeting all of the necessary requirements, the County followed their recommendation and put ePrime to the test to finish out the 124th Street project.

Ultimately, the County was pleased with the test run and the completion of 124th Street. It was decided ePrime would be used as the sole priming solution for all CSPB stabilization projects in LA County. 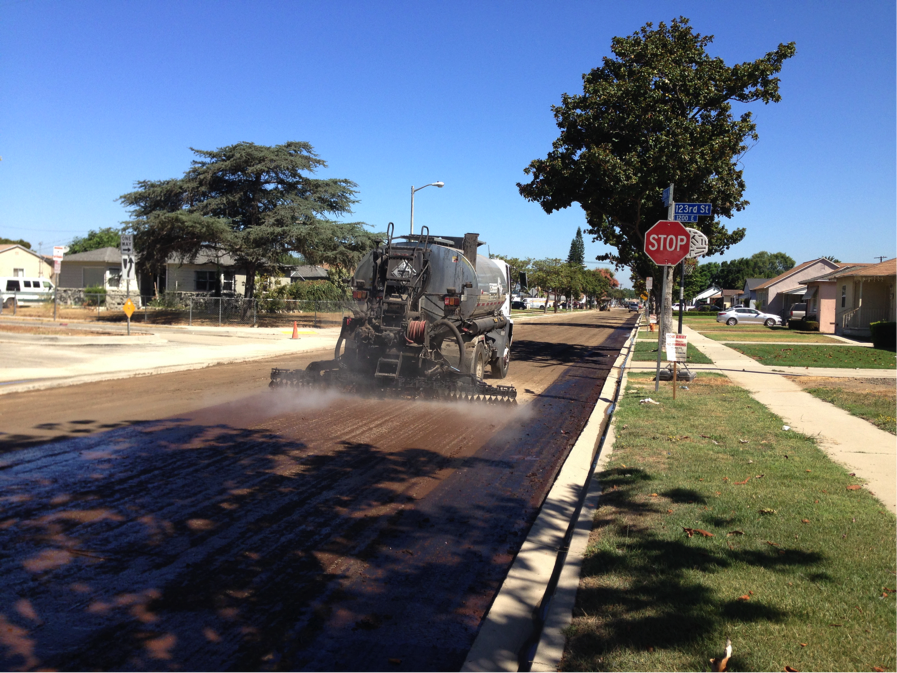 ePrime is a solvent-free prime coat which is designed to penetrate the base. Its less-tracking design protects the base during construction and creates a strong bond between the base and asphalt layers.

Moving forward, preparation began on the Transbarger Street project in a residential area of Rowland Heights, near the City of Los Angeles. This project included a three and a half mile portion of Transbarger. Both LA County and Ergon A&E expected ePrime to be the right solution to seal the micro fractured base and create a strong bond to facilitate the road paving and rehabilitation process. The Ergon A&E team was excited for the chance to display ePrime’s full potential in LA County.

Roadwork was set to begin in September of 2014, preparing the road base for treatment. Toro Enterprises, Inc., out of Oxnard, CA, was selected as the contractor, and Diversified Asphalt Products was the sub-contractor hired to administer the ePrime treatment. Ergon A&E had worked with this sub-contractor before; however, not in applying this particular product. Tom and Todd were present to provide any needed support to the crew.

Tom and Todd’s presence during the application process was helpful in allowing the sub-contractor to understand ePrime’s application process and suggest proper techniques for reaching optimal results. The product was produced and delivered from Ergon A&E’s Fontana, CA, emulsions plant site. ePrime was applied to the length of the roadway over a two-day period beginning April 20, 2015. During application, the weather temperature was in the mid 50s with cloudy, overcast skies.

Application of the ePrime began with a pre-wet surface and at a shot rate of 0.11 gallons per square yard. The cure time was 45 minutes. Within the hour, contractors began laying a 3” layer of CCPR asphalt concrete pavement to the roadbed followed by a thin overlay of Asphalt Rubber Hot Mix to complete the driving surface. 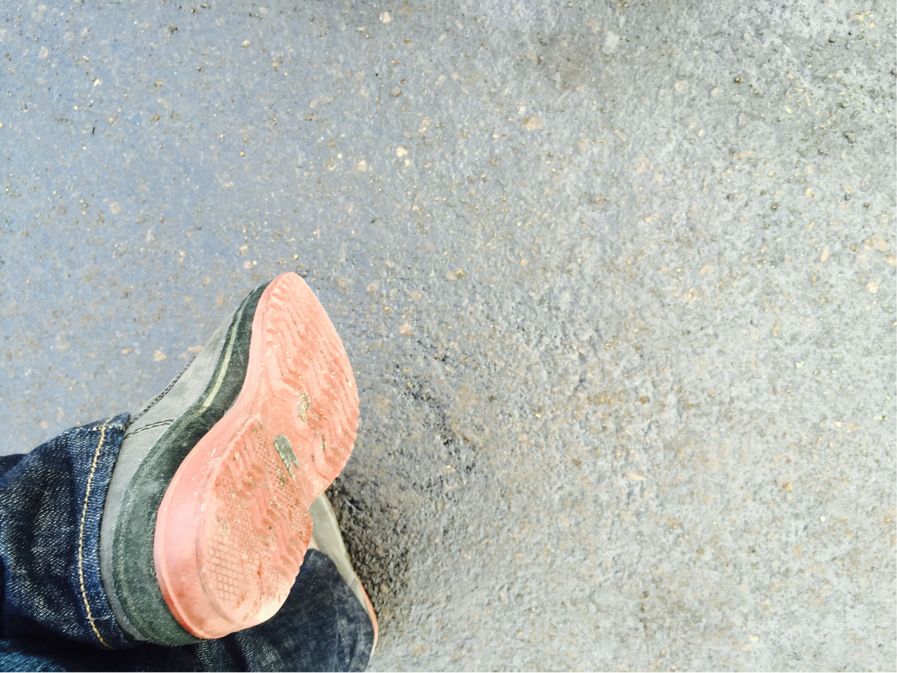 The crew was impressed that even immediately after application, ePrime did not track. ePrime is a quick-curing formula allowing roads to be pave-ready within a few short hours. Same-day paving is key when working in high-traffic or residential areas such as 124th and Transbarger streets.

The Transbarger Street project was the first time the County got to see the full benefit of using ePrime from start to finish. They were again pleased with the stability ePrime provided during the construction phase, same as the 124th Street project, but were amazed at the ease of application and the lack of tracking after application. ePrime delivered on its promises, providing a protective moisture barrier for the base and creating a permanent bond between the base and subsequent asphalt layers to prevent slippage.

The process of stabilizing the roads in this area will be utilized over the next four to five years. With ePrime as their signature prime coat treatment in the road rehabilitation process, it ensures the improvements made can stand the test of time.

The success of ePrime is growing at a tremendous rate in California. LA County, along with other counties and national parks, now specify ePrime for their improvement projects. ePrime fills the need for environmentally compliant prime coats that are top-quality, user-friendly and get the job done right the first time.